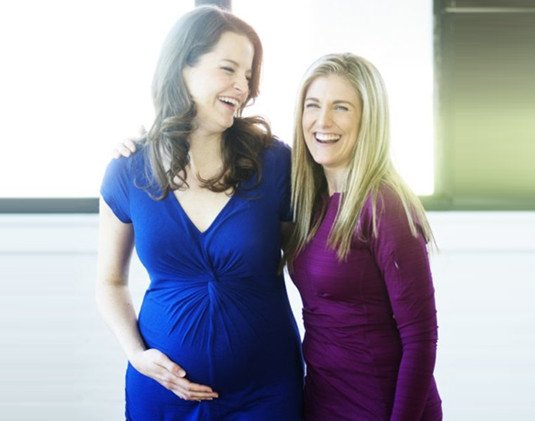 Ready to navigate your pregnancy
with Ease, Confidence and Joy?

It’s a full program that gives you the tools and information you need to feel confident, connected to your baby and pregnant body, empowered to make choices that are right for you, and overall feel great mentally, emotionally & physically.

All of this while be surrounded by a loving and supportive community.

Your Path to a Vibrant
Pregnancy!

This program was born with the birth of my daughter.

Motherhood became my catalyst for sharing the power and potential of a yoga practice with women like you.

I didn’t have the tribe or resources like prenatal yoga and pregnancy-specific tools that I craved as someone dedicated to health & wellness. So I decided to create it.

Now, I’m grateful to God for everything. From the life crisis that awakened me to my yoga path to the incredibly joyful experiences I share with thousands of moms when they reach out and hold their baby for the first time.

It’s my deepest honor and pleasure to witness and be chosen to support any woman on their journey to motherhood. It’s beyond inspiring and I get to surround myself with the most courageous and fiercest women on the planet! 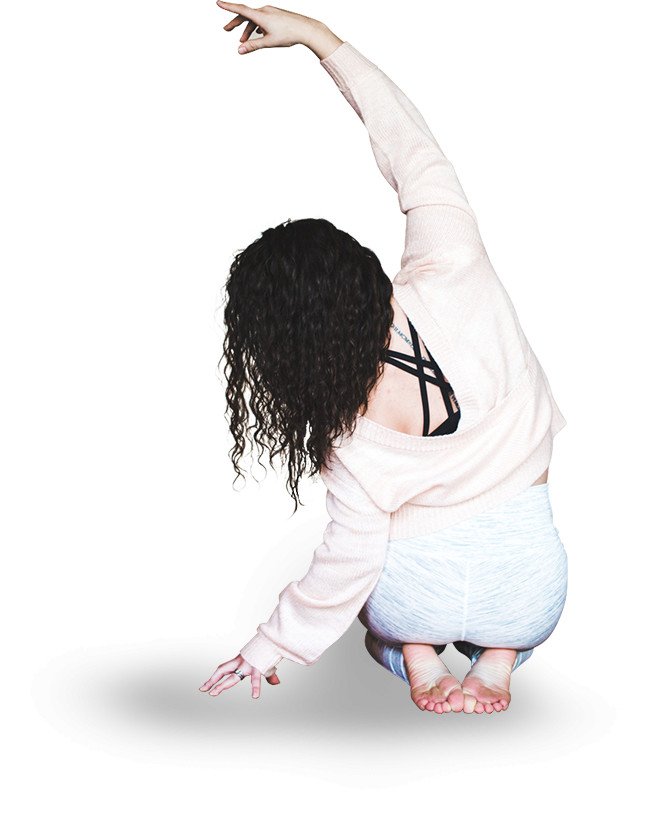 is in the format of a self
navigated online course.

What is included in
BLOSSOM? 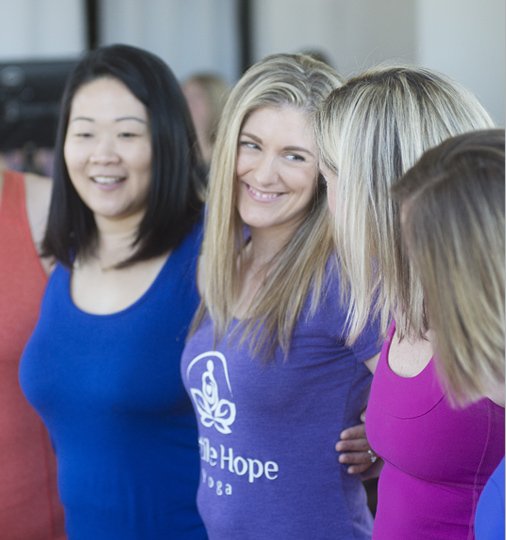 What is not included?

Yoga props are not included with the purchase of the BLOSSOM yoga for fertility course. All of the Recommended props are here: https://fertilehopeyoga.com/supporting-your-fertility-with-yoga-props/ 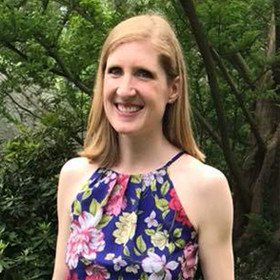 “This program is very beneficial for the mind, body and soul. I strongly
recommend Fertile Hope Yoga to all of my pregnant patients.”

(Videos range from 30 min to 45 minutes in length)

The videos are professionally produced and your host, FHY founder Erin McCollough, will walk you through each practice with expertise and supportive knowledge. 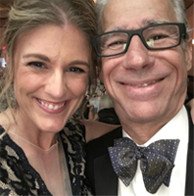 We unconditionally guarantee your satisfaction. If our product fails to meet your expectations-expect a full refund within 14 days of purchase.

What Fertile Hope Mamas are Saying

The sciatica video is AMAZING! After I practiced it, I felt pain free for the first time in a long while! I am 25 weeks and I have LOVED all of the videos in the BLOSSOM pregnancy yoga program. This is an (almost) daily practice for me and I feel rejuvenated in my body, mind and soul after taking the time for myself and now, my baby, to bond, ground, and be present. Thanks so much for creating these!!! Totally worth the money!

Pregnancy yoga with Erin helped me feel physically strong and relaxed throughout my pregnancy. I know that the strength I gained made my recovery smoother and helped me get back into shape quickly after my daughter was born. More importantly, the tools that were reinforced in the program has kept me balanced and allowed me to take each moment as it comes.

The Stretching, Breathing & Pelvic Floor Exercises Were Especially Helpful As I Navigated Through Labor

The prenatal yoga program at Fertile Hope Yoga was exactly what I needed to strengthen me during my pregnancy and help me through my labor. The stretching, breathing and pelvic floor exercises were especially helpful as I navigated through labor. I always felt safe and supported. Erin really knew her stuff and shared knowledge of pregnancy well beyond the sphere of yoga.ed and allowed me to take each moment as it comes.

The BLOSSOM pregnancy yoga videos were a sanity saver! They gave me the opportunity to relax deeply and to practice trusting my body's wisdom (and to stretch my achy pregnant hips). I had a lot of anxiety about the birth, but I also gained confidence that I could handle it. I would highly recommend Fertile Hope Yoga to any expectant mama!

As soon as I found out I was pregnant with our first child, I immediately started researching safe ways to exercise during pregnancy and found Fertile Hope Yoga. I was hoping to get a little relief in my lower back and what I got was much more than relief. The videos are designed to help ease the pain in different areas of your body and does just that, but it’s also designed to ease your mind and help you to connect with your baby, your body, other women and your community.

FHY is a proud partner of 1% for the Planet and has committed 1% of all sales to this non-profit organization that funds projects all over the world to protect and support the environment…the mother that nourishes us all.

Ready to navigate your
pregnancy with more ease,
confidence and joy?

I’ve never done yoga, do I have to be flexible?

You don’t have to be flexible, into yoga at all or have a certain body type. Anyone can participate! The BLOSSOM yoga for pregnancy program is great for beginners and the poses can be modified based on your needs. The practices are very specific and it’s more about the therapeutic benefits of each pose. So no matter what your previous experiences with yoga look like, this will be different!

How many yoga videos can you do per week? How long is the BLOSSOM program?

The BLOSSOM yoga for pregnancy program has videos that will take you through your entire pregnancy. You can practice as often as you would like since you self navigate through the course and the videos are pre-recorded.

How long are the yoga videos within the BLOSSOM program?

The yoga videos range in length from 30 minutes to 45 minutes. They are the perfect length to fit into a busy lifestyle.

Are the yoga for pregnancy videos streamed or can I download them?

When you purchase BLOSSOM, you will be given a unique login and password to access the course. All of the video content is streamed within your course and cannot be downloaded. You can access your course and the yoga videos from any device and from anywhere as long as you have internet access.

When should I start prenatal yoga? How long should I participate for optimal results?

The BLOSSOM yoga program was designed so you can safely start anytime and feel confident the practices will align with exactly where you are in your pregnancy. Studies show that practicing prenatal yoga reduces your risk of pre-term labor and other complications so we recommend a consistent practice throughout your pregnancy. You should always consult your doctor or midwife if you have any concerns.

Is support included? Can I ask questions if I don’t understand something or want to check something?

Yes! You can always email support@fertilehopeyoga.com with questions. Also, as a member of BLOSSOM, you have access to a members only facebook group where you can tap into the power of community and get all of your questions answered as well.

Do I really need this?

Many women think they don’t need yoga or they’re not a “yoga person” when they start. Then they try out the courses and realize it’s so much more than a yoga practice. At Fertile Hope Yoga, we believe it truly takes a village. We focus not only on making you feel good and confident in your body as you navigate the changes that come along with pregnancy, but help you feel prepared mentally and physically for labor, birth and have a head start to thriving during your postpartum period. We believe healthy mamas equals healthy babies and families.

Is it safe to practice yoga while I am pregnant?

Also, because lawyers…
Yoga is 100% safe to practice at any point in your fertility journey when you follow these terms:

Physical exercise, in all of its forms and with or without the use of equipment such as blocks, straps or any other equipment that may be suggested by a Fertile Hope Yoga instructor, is a strenuous physical activity.

Accordingly, you are urged and advised to seek the advice of a physician before beginning any physical exercise regimen, routine, program or using any suggested equipment, shown in any of the video clips on the Website. Fertile Hope Yoga is not a medical organization and its instructors or staff cannot give you medical advice or diagnosis.

By using the Website you represent that you understand that physical exercise involves strenuous physical movement, and that such activity carries the risk of injury whether physical or mental. You understand that it is your responsibility to seek the approval of your doctor to continue these exercises in the event you become pregnant.

You understand that it is your responsibility to judge your physical and mental capabilities for such activities. It is your responsibility to ensure that by participating in classes and activities from Fertile Hope Yoga, you will not exceed your limits while performing such activity, and you will select the appropriate level of classes for your skills and abilities, as well as for any mental or physical conditions and/or limitations you have.

You understand that, from time to time, instructors may suggest physical adjustments or the use of equipment and it is your sole responsibility to determine if any such suggested adjustment or equipment is appropriate for your level of ability and physical and mental condition.

Are there any clinical studies that show this type of program helps?

Yes! There is so much science backing the benefits of yoga!

IVF Study: Mind body techniques such as yoga have also been shown to improve in vitro fertilization success rates by lowering stress hormones. In a behavioral study of 151 women undergoing IVF, birth rates were 93% higher for women with the lowest stress and depression levels. (2)

Anxiety Study: Participation in a two-month yoga class can lead to significant reduction in perceived levels of anxiety in women who suffer from anxiety disorders. This study suggests that yoga can be considered as a complementary therapy or an alternative method for medical therapy in the treatment of anxiety disorders. (3)

PCOS Study: Ninety adolescent (15-18 years) girls from a residential college in Andhra Pradesh, who satisfied the Rotterdam criteria, were randomized into two groups. The study concluded twelve weeks of a holistic yoga program in adolescents with polycystic ovarian syndrome is significantly better than physical exercise program in reducing anxiety symptoms. (4)

Stress Study: We aimed to evaluate potential effects of Iyengar Hatha yoga on perceived stress and associated psychological outcomes in mentally distressed women. Women suffering from mental distress participating in a 3-month Iyengar yoga class show significant improvements on measures of stress and psychological outcomes. Further investigation of yoga with respect to prevention and treatment of stress-related disease and of underlying mechanism is warranted. (5)

Pregnancy Study: This study examined the effects of a yoga program during pregnancy, on maternal comfort, labor pain, and birth outcomes. The experimental group was found to have higher levels of maternal comfort during labor and 2 hours post-labor, and experienced less subject evaluated labor pain than the control group. The experimental group was found to have a shorter duration of the first stage of labor, as well as the total time of labor. (6)

How long do I have access to the BLOSSOM yoga for pregnancy course that I purchased?

You have lifetime access to the BLOSSOM course with purchase.

What happens if I don’t like the program. Can I get a refund?

You’ll get a swift and complete refund. Do pay attention to dates. I make the refund deadline extremely clear to everyone who enrolls. The deadline exists because, if you enroll in BLOSSOM, I want you to get started. I’ve poured my heart and time into these programs and I want to devote that effort to students who are committed.

If you don’t plan on starting right away, make sure this is the right investment for you as the refund period does have a firm deadline, which is two weeks from the purchase date. 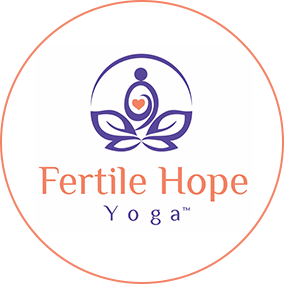